skip to main | skip to sidebar

Or maybe it's just babies in general. A few of our intra-Europe flights have been on SAS, an airline I've never known before, much less with an infant.

Lap children get a separate infant seat belt that attaches to the adult seat belt. It's just a loop, and it seems a lot less safe than wearing the baby in a inward-facing bjorn. But, the flight attendants were adamant about it so we put it on her. we also got a separate infant life vest and instructions on putting it on.

Going through security was a breeze - in Manchester, we got to go in a special stroller line with no wait, and the airport security personnel helped us get all our gear on the belt. At the gate, they boarded us first so there was always room for our stuff and we had plenty of time to get settled in. At check in, we were also lucky enough to get a row to ourselves. (so far we are 3 for 3 on intra-Europe flights).

The Little Dictator got cooed over by men and women when we were in Copenhagen. At our first dinner, in a small, cellar like restaurant called Puks, we sat near two tables, one of older men and another of older women. The LD fussed through dinner, so I ended up nursing her while eating. (Always find a restaurant with booths - you can do so much in a booth.) No one stared or even looked our way.

(perusing the menu at Puks: smorrebrød and more brød)

Eventually, the LD decided to put an end to our dinner - No dessert for you! - and as we were putting her back into the stroller, she decided to put on the full-on scream. We looked around apologetically, and all we saw were benevolent smiles. This happened every time the Little Dictator made her presence known in a restaurant which, unfortunately, ended up being most of our meals in Copenhagen. Surprisingly, each time we were met with smiles from the other diners and complete nonchalance to nursing her at the table and changing her in public.

The capper was on our last night in Copenhagen, when we went to Tivoli, a little amusement park in the city. Not only did Tivoli have a baby changing area, but they had free diapers and an indoor nursing area with comfy armchairs.

And ... Most restaurants are kid and baby friendly, even ones that serve grownup food. Here is Cap Horn, a lovely restaurant where we had lunch in Nyhavn.

- Posted using BlogPress from my iPad

On September 20, 2008, I passed my AKC Canine Good Citizen Test on the first try! Momma almost fainted with surprise.

Which celebrity are you? 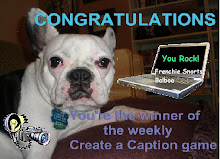 Biggie is still the only kuvasz on Daily Puppy.